That’s what I had been collecting for the better part of my twenty years in London.

Comics, mostly 2000AD, Archie and Manga (or Japanese comics, for the benefit of the few who are unfamiliar with the wider concepts of popular counter-culture).

Records, mostly classical and rock with a few CDs of Irish traditional music thrown in.

Books, of various types, ranging from fairy tales by Hans Christian Andersen and the Brothers Grimm, to dictionaries, the complete works of William Shakespeare, the Bible, not to mention a blooming great big atlas…

And in the past couple of years I began to wonder why I was keeping all this faff. I only changed my address four times between 1991 when I first started living in London and 2011 when I left it all behind. But the hassle of transporting it all from one place to the next was getting to me. I wasn’t just collecting records and comics, I was hoarding them. And I can’t begin to calculate the money I spent on it all during that time.

And every compulsive collector will agree with me, it’s almost impossible to decide what to get rid of. You know your collection has grown too big, it’s unmanageabe, it’s taking over your life, whether it’s books, records, comics, cigarette cards, butterflies… and you know that some of it has to go. But you’d never dream in a million years of just dumping the whole lot in one go.

But the events of the latter weeks of March 2011 forced me to do just that. For the first time since I was ten when I got the album “Ghost in the Machine” by the Police I have no records, tapes or CD’s. (Although I do have about 50 mp3 recordings on my mp3 player and my mobile phone.) And for the first time since I was six when my Mum brought me home a copy of the “Beano” I have no comics.

My hoarding days are over. May they never return.

I wonder why Dundalk is so special to me. It’s not unlike any other town in Ireland. In fact, on an overcast day it’s pretty dull.

On the road from Belfast to Dublin, Dundalk is the first major town over the border into the Irish Republic. Although I’m always trying to convince myself that this border that divides County Down from County Louth doesn’t really exist (and the fact that I can freely move between the two counties proves that), there’s something about Dundalk that makes it a place I try to get to visit at least once a year.

I can trace this fascination with Dundalk back to my childhood, to when I was nine or ten. I grew up in Belfast where there was a perennial fear of violence, from sectarian morons who would blow your brains out as soon as look at you and from the “security forces”, the army and the police who could literally get away with murder, and nearly always did.

In the Republic of Ireland there was no such fear. It’s true there was a deep recession and a government in Dublin who didn’t seem to have a clue what to do about it (plus ça change, plus c’est la même chose) and most people hadn’t two pennies to rub together, but to me living there was vastly preferable to living among all the misery in 1980s Belfast. Everything south of Newry and west of Derry was a land of freedom.

I just wish we’d had a sunny day for our trip. Most of the town’s buildings are pretty grey and an overcast sky is no help at all. Even so, Dundalk is a nice place to visit and to walk around.

And the weather we’ve had here has been glorious. Things seem to be saying to me, “Welcome back”. 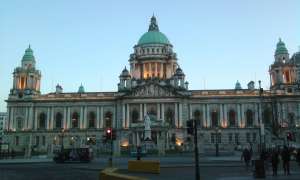 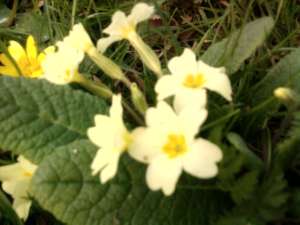